Yesterday was one of those gloomy, rainy-stay-inside-all-day summer days. It rained and rained. It was not without its benefits, however. Certainly our gardens are happy to have rain--our spring was very dry. It also appears that the animals were happy. While the kids were upstairs listening to yet another Neil Gaiman book, on cd and I was cleaning downstairs, I spotted the crows, beloved by me, outside the window. 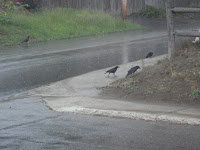 I've been watching two crows all spring as they stomp side to side-like across our neighbor's yard as I cook or wash up in our kitchen and they look for potential meals. A couple of weeks ago I spotted a baby crow up in the neighbor's white pine being fed by it's parent (or sibling since previous generations often stick around to help raise the next). I was hanging up laundry. It seems like we are constant companions in our domestic pursuits.

So when I saw them outside, I called the kids down and we watched as six crows, presumably family, stomped around the yard in the pouring rain. The youngsters stood out as they flapped their wings, preened constantly and side-stepped along the cedar rails that make up our neighbor's fence. They looked goofy as they shuffled and even goofier as they skipped-hopped over the corner posts, as if they were not at all convinced their wings would keep them in the air. We were further entertained watching this pair as they raced to capture flotsam and jetsam as it floated down the street. 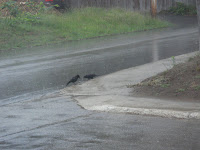 They would also stand facing the water as it rushed down the street, dip their heads and open wide as the water rushed down their gullets. Eventually one would score a particularly fascinating piece of flotsam and run away with it as the others chased after the lucky crow as if to say, "hey, hey, whatchya got, hey?". Then they would all go back to what they were doing, companionably. The kids and I stood there watching just a bit longer, and then we also, went back to what we were doing, but with the feeling that the crow family made very likeable neighbors who didn't complain about the rain or that I had chores to do. And there are no more fitting neighbors for a rainy day listen to a Neil Gaiman novel, (unless it's a black cat the kids made do with the one ginger and the one calico), than crows. 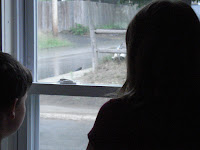