Marriage Is A Civil Right

Yesterday I and our two children attended, along with several thousand of other Mainers, the hearing on An Act To End Discrimination in Civil Marriage and Affirm Religious Freedom (LD 1020). With one of the largest turnouts expected, the hearing had been moved to the Augusta Civic Center. It's a good thing, too, since about 4,000 people attended. And since Equality Maine had urged supporters of the bill to wear red, we could see how equal marriage supporters easily out numbered opponents by at least twice. 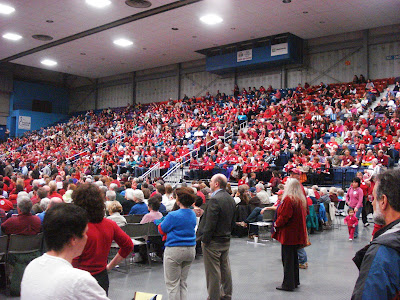 With such large numbers of people wanting to speak, the hearing lasted until 8pm and there was a waiting list for speakers. Because of that, we did not speak, though Alex had prepared the following letter. Regretfully, Alex had to work, but the kids and I stayed for five hours of the hearing. It was often moving, and downright sickening at times to hear the hate, fear and lies coming from the people who want to continue to discriminate. There were two speakers that I thought were very memorable. The WWII veteran who had fought in just about every major arena and battle had traveled about six hours to be there and he spoke with eloquence about his war experience and how he did not fight so that we could deny some their freedoms. He had many of us breaking out in goosebumps and looking for tissues. The second was a teen who wants to be able to recognize his mother's partner as his step-mother--legally. He spoke about how his school, friends and their parents and his community often fail to acknowledge or recognize his relationship with his step-mom because legally, she is a total stranger to him. Those were just two of the amazing testimonies we heard. Our hearts were certainly full by the end of our time at the hearing. We were also grateful that everything we would have said was, many times over. 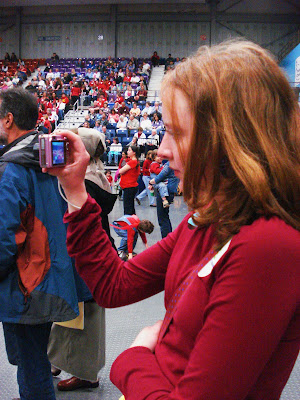 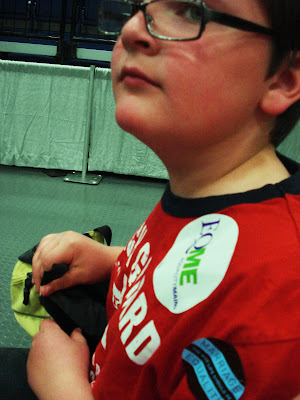 Here's what Alex had prepared for me (he wrote it as his contribution to the day, since he could not attend):

I am here today to express my support for An Act To End Discriminationin Civil Marriage and Affirm Religious Freedom (LD 1020). I stand before you as a wife, a mother and as a daughter of a gay man who does not have the same rights that I do.

The laws around marriage in our state discriminate against people based on their sexual identity, like my father and his partner. Not all Maine people can approach the wedding altar or get a marriage certificate from the county courthouse. Discrimination is wrong, and we can look to other Maine laws for direction, such as the laws in Maine protecting all people from work place discrimination.

However, instead of looking at legal precedents to measure our laws, people look to other places for direction when this issue is discussed. When people talk against legalizing gay or lesbian marriage, they often start with “I believe.” However, the act of marriage does not require a religious ceremony. Marriage is a legal state of being, and discussions of faith and belief are irrelevant. If we allow an individual's personal religous beliefs to impact everyone's civil rights, the law can do real harm to people.

Here are a few examples: At one point in this Country’s history, it was believed that slavery should be allowed and the laws supported the right to own people as property.

Laws supported the belief that women should not be allowed to vote.

Laws supported the belief that separate was equal.

In each of these cases, and in many more, the belief was proscribed into law and people were hurt. We cannot allow an outdated belief that hurts Maine people define the law in our state and in our country. The marriage laws in Maine were not created to harm anyone, but we are now aware that they do. The laws deny marriage to two people who love each other and who are committed to each other and who want to legally join in union in the same way their hearts are joined. To quote Albus Dumbledore, “you have to make a choice between what is right and what is easy.” It would be easy to keep the law the way it is. It would be easy to hide behind faith and beliefs and hatred and say they don’t deserve the same rights as the rest of us. But we have done that before, and it was wrong.

We are so lucky in this country that we get to choose to do what is right. We get to be on the good side, the light side, the loving side. So we need to choose what is right and we need to change the law, and we need to start today. LD 1020 defines marriage as “the legally recognized union of two people.” We can all read and understand this law, and we all need to support it. To every person who supports this law, I thank you. You are doing the right thing, and that is a universal value. To every individual person who opposes this law, you need to look into your heart and ask yourself if you really want to hurt people. Do you want to deny others the same rights you have? Do you want to discriminate? Because that is not the way we do things in the State of Maine, and that is not the way we do things in the United States. To everyone else, who is not sure or who is leaning one way or another, I welcome you with open arms. Come over to the light side, the right side, the fair side. Join us. It may not be easy, but it is the right thing to do. It is said that “as Maine goes, so goes the nation.” We have an opportunity to change the direction of our country here today. LD 1020 is right. LD 1020 is just. LD 1020 is fair. And that is why we need to support it and make it the law for Maine. Thank you.

This is a collage of my family, orginally posted here. My Dad and Tim have been together for almost 19 years. They have four grandkids and much extended family and friends, and their life is as normal, hectic, full, loving, happy and filled with tedious moments just like anyone's. 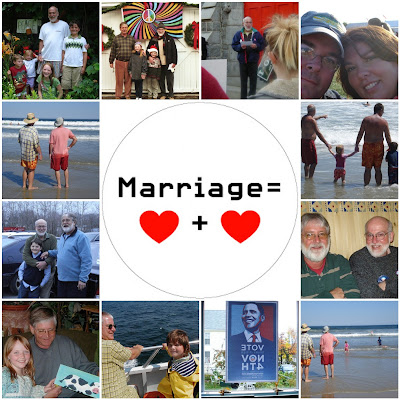 And then there is this--get the tissues. You'll need them.