Cliches Be Damned: We're Taking This One Day At A Time

As I mentioned briefly in earlier posts, Alex's mother was diagnosed with Stage 3 intestinal melanoma in late August. She spent Labor Day in the hospital, post surgery, and then had a kidney removed in late October. Between then and Thanksgiving, she experienced tremendous nausea, fatigue and weakness and her health deteriorated rapidly, ending in a week of hospitalization, during which time, scans showed that the cancer had spread. While she had hoped to postpone any chemotherapy until at least mid-December, her medical team advised her to move up the date. As a result, everything has been happening very quickly, since.

This past week involved much deep breathing, hand holding, angry rants and yes, some crying. There was much lost sleep, many miles and hours logged on the road from our home to the homestead, the hospital and the cancer center. We heard words and phrases like palliative care only, side effects, colon cancer. There was also the advocacy, the clarifying, the questions asked. There was juggling of work and home; asking friends and neighbors to help, here and there. We needed co-parents last week, and we got them. Other times, our teens managed the house and their long days with resilience. There was learning: about chemotherapy, the medications, the new schedule, the side effects. We met neighbors and gave hugs and passed tissues, and accepted help in the way of casseroles and assistance for now and the future. 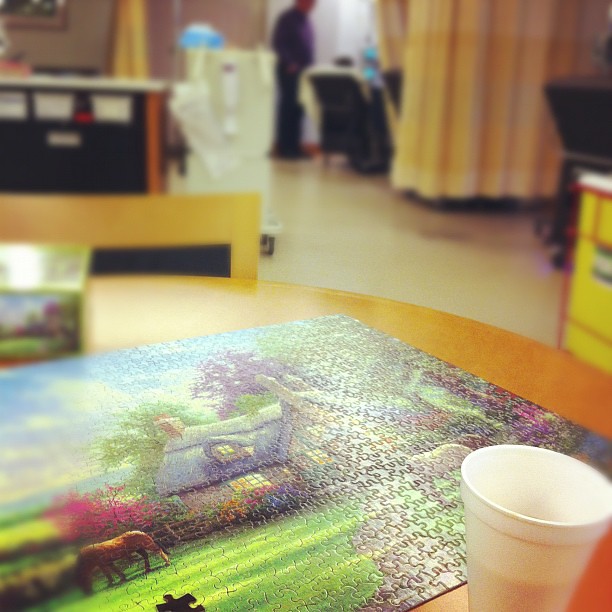 There was the constant worry. Nana, as she is known to our children, was going to be released from the hospital, but with no home health arranged and no way and no one equipped to attend to her needs in the old farmhouse, with her mobility and strength diminished, we had many questions and anxiety about how to help her and Alex's 79 year old father, the most.

So this is what happened: we visited her on Sunday at the hospital. On Monday, Alex spent the day talking with her medical team on one phone while he did his paid work on another phone. On Tuesday, while I was with the kids for their writing classes, he was told she was going to be released from the hospital, which concerned us, given the state of her health on Sunday. We were told she was also going to get her chemotherapy training on Tuesday evening. As soon as I got the kids home, Alex and I drove the hour and a half to Augusta. We saw her rapid breathing, her flushed cheeks and glassy eyes and her edema, as well as Alex's exhausted father and we were worried. How was his dad meant to get her home, in the dark, and then care for her? Then the oncology nurse met with all of us, and we were all trained on her chemotherapy. We asked questions of everyone, especially about her home care. When her physician came in, we learned new things about her health, things we hadn't heard before, like how she had colon cancer and how her chemotherapy was recommended as a comfort measure only, and not as a curative measure. And then we made sure Alex's father, who has hearing loss, understood all of that, too. We made sure the oncology nurse spoke to Alex's mother, not about her. And we made sure that mom knew that any treatment she was to pursue, would be her choice. We made our concerns to the oncology nurse known, and she finally confirmed with us that mom would not be released until Wednesday morning. We said good-night to her, and then took Alex's dad out for a late dinner, and tried to come up with a strategy for care.

On Wednesday, Alex, still working, and I, went up to Augusta again in the morning and met his parents at the cancer center for mom's first chemotherapy session, which lasted from noon to 5pm. Also on Wednesday, we had three co-parents backing us up--Rachael and Brandy were just a phone call away for the kids if they needed anyone and Alex's sister, Auntie Heather, who had to work, was able to pick up the kids and take them to choir in the evening. We are grateful. We learned much more about chemotherapy and the possible side effects and all mom's medications at the center. We sat with her and dad and did our best to support her. As her session was wrapping up, Alex's dad and I went ahead to pick up prescriptions and groceries, and Alex took his mom in our car back home. Once home, it took both of us to get her into the house and settled on the sofa, and she asked for a packet of the orange peanut butter crackers I had picked up for her, (she had asked for them when Alex called me at the grocery store). With his mom resting safely and comfortably, Alex and I raced around trying to prepare food for everyone, do some much needed cleaning and we cleared pathways in the house. Meanwhile, we discovered that not all of her prescriptions had been filled, so Alex's dad ran out at 745p to fill them. His mom fell into a long-overdue, deep sleep under a layer of quilts and Alex and I went upstairs and took apart a bed and brought it downstairs and set it up in the living room. During all of this, we still weren't certain who, both or either of us was staying the night. As the clock ticked, however, we knew that both his parents needed help, Alex's mom most of all, and they couldn't do this alone. We decided Alex would stay, because he could still do his work while supporting his parents and a parent was needed at our home, too. So around 10pm, I left for home, in tears, the weight of the past days and the news about mom, the worry and exhaustion and the separation from my husband and children, finally catching up with me. On my drive home, singing to Christmas radio for company, Alex called to let me know that his mom had woken up, and with much assistance, was able to move to the bed. That was Alex's first night on the couch, where he slept beside his mother, so that he would be ready to help the moment his mom needed him. 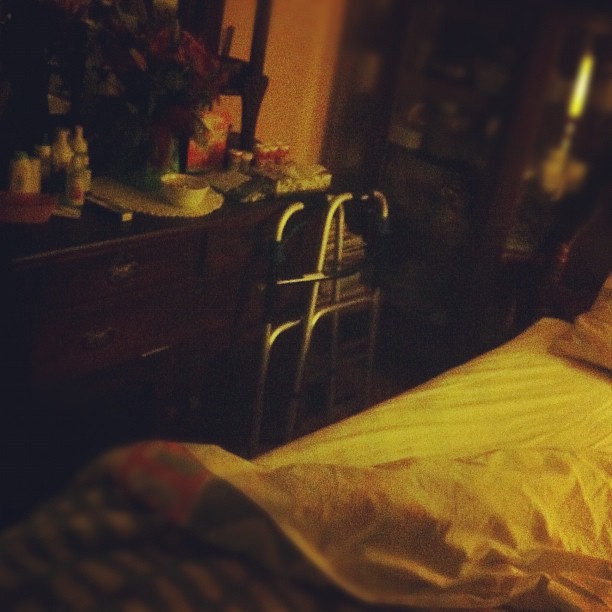 I arrived home late, to two teens who needed to chat and be caught up and cuddled. We were up to after 1am, and we planned to all go up to the homestead the next morning. On Thursday, that's what we did. We stopped on the way to pick up some more grocery items. When we got to the house, Alex was clearly in charge, stressed but competent, managing somehow to put in a full day's paid work while also caring for his mother. (Because of her edema and weakened state, she needs help moving around the house and needs a person to help her up and assist her with in using a walker.) The kids and I quickly realized that we were more of a hindrance than a help. While we had prepared to stay the night, just in case, we decided that would be more a burden to all of them. Alex did go over the chart he made to keep track of her medications and we had a long phone call with his sister, where we all voiced our concerns regarding the sustainability of the current arrangement. Alex would someday need to return home, of course. How was this all going to work? Who else could help? I could take shifts, also, but living 100 miles away was beginning to take its toll, too. Heather has to work, and is also 100 miles away. One day at a time, Alex kept reminding us. So the kids and I packed up and drove home, after giving everyone big hugs. We wouldn't see Alex again until Saturday.

World, let me shout this from the rooftops--my husband is the best damn nurse anyone could ever hope to have. Last week he managed to put in a 55-hour work week, while sleeping on a sofa, while caring around the clock for his mother and giving aid and support to his father, but also his wife, children and sister. He's tender, gentle, caring, respectful, organized, efficient, loving and so very kind. Thursday night we got updates. Friday, all day, we talked, trying to plan, think all this through. Friday, home health people came in, and that was good. On Saturday, I got up and drove the 100 miles again, to do some more cleaning, talk with Heather, who was taking the weekend shift, and assist with her training on all the care information, meet with neighbors, and eventually take Alex home with me. Alex went through his highly organized schedule and calendar. He hugged his sister through tears and kissed the neighbors in thanks. And there was this moment, when he was telling us that his mom enjoyed hugs and kisses and hair brushing, that she leaned into him as he kissed her on the head. 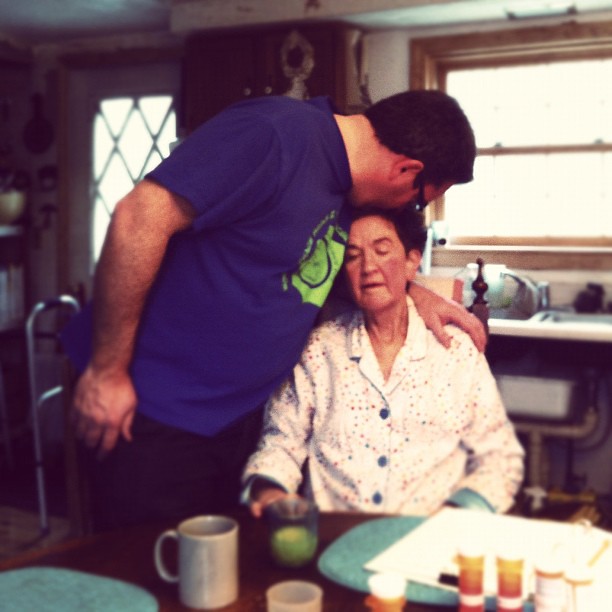 He is a good, good man, my husband.

Where do things stand now? Now, there is home health four (or five) days a week. There are neighbors and friends who are showing up Monday morning to help get mom to the car for her appointment. Heather is taking the weekend shifts. Mom's sister is coming to spend some nights with her. We are ready to jump in as needed. Right now, before the side effects of the chemo have really shown themselves, mom is mostly just very tired. We don't know what else is in store for her. Next week, she has her second round of chemo, and things could get a lot harder for her. We simply don't know yet. The end of the month is too far ahead to plan. So we are planning for this week. All we can do, is love each other, as much as possible. No matter what.
Posted by Amy Bradstreet at 11:16 PM