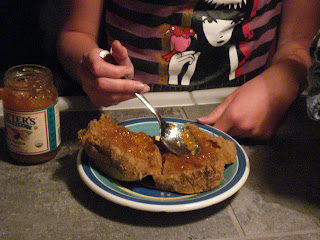 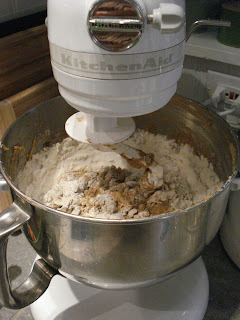 Yes, I did make the bread yesterday, thank you. I made five sponges which resulted in the nine bags of rolls I have in my freezer. Well, eight, because we ate the ninth for dinner last night. Once in awhile it's okay to have a dinner of fresh, hot, steaming rolls with butter and jam, don't you think? Everytime I make the bread I think about how it wouldn't have been just a mere four hours out of a day for some other distant mother, but probably an entire day, and thanks (thank you thank you) to my 6-quart KitchenAid stand mixer, I can whip up two weeks worth of bread for my family in an afternoon. I still knead and love the bread into shapes, so the bread becomes what it wants to be--fluffy, flaky and delicious, and I get to help it along without becoming shackled to it. And that four hours it takes me to make the bread is saving us money. Because we were buying bread from a local baker, I had to be in a nearby city to pick it up, at $4-6 a loaf. But for a $22 bag of flour, some yeast, blackstrap molasses and a little bit of green electricity and some propane for our gas stove, I have eighteen loaves of bread. I'm thinking that's a deal. And I don't shape the bread into loaves, I shape it into rolls because rolls can serve as burger buns, dinner rolls, sandwich bulkies, or breakfast and they keep longer. So here's to bread-making, I recommend sticking your hands into some dough.
Posted by Amy Bradstreet at 9:21 AM

Labels: from our kitchen