If you've never experienced an ice storm, there's nothing like it. Some light freezing rain, sure, hail even. An ice storm is something bigger and other than any of those weather phenomena. Ice storms begin with rain on a cold but not frigid winter day. It blindsides you because it seems so innocuous--it's rain, there might even be thunder, what's the harm in that, right? Slowly, maybe after it's dark or when you are sleeping, the ice builds, drop by drop, building layer upon layer of frozen mass onto absolutely everything. An inch of ice might not seem like much, but an inch of ice on a tree limb, all the tree limbs, can bring down that tree with a booming crack straight onto the roof of your home, block your road, bring down power lines with it and can cause injury and even death.

Almost eleven years ago we experienced the Ice Storm of 1998 (or as the t-shirt says around these parts "I survived the Ice Storm of '98"). I think it's fair to say we didn't know what was hitting us. I was home with nine-month old Olivia in our second floor apartment in an urban Lewiston neighborhood surrounded by three-story homes and very little trees. Alex drove to work that Wednesday morning. I recall that the weather reports had predicted that we would either get lots of rain or tons of snow. No one was really talking about ice, and certainly not like we got it. Alex drove home on treacherous roads that evening, we lost our power and we kept hearing these loud explosions and seeing flashes of blue that at first we thought were thunder and lightning? but later realized were transformers sparking and live power lines falling. My dad had shown up at our place, hand injured and bruised because after leaving his job at the nearby bakery, he tried to get to his rural home in neighboring Auburn, only to find the road blocked by downed trees. His hand was hurt when he tried to move some limbs. My dad had to turn back, unable to reach his home, not knowing if his pipes would freeze, or if his house was safe from all the surrounding trees. He ended up sleeping uneasily on our couch. I also remember thinking I should get some groceries. That was when I really started to realize something was really wrong. The roads were awful, covered in huge slushy ruts that froze immediately, freezing rain was pouring down, trees were cracked and power was going out everywhere. I made it to the store just a mile from our place, got my cart and made it as far as the produce when the store lost power. I waited for two heartbeats in pitchblack, not moving, and then the emergency lights came on. The store management said they'd allow us to buy up to twenty dollars worth as long as we had cash or check and then they'd close. I raced around the store grabbing essentials, grateful I was able to do that much. Once home, the sound of the ice-rutted road crashing in my ears still, we dug out the camp stove and cooked on the porch by flashlight. We eventually snuggled into bed, grateful also for the warmth of our baby daughter, wondering what the next day would hold.

Though I find this mind-boggling now, Alex drove the 45 minutes to Portland the next morning, January 9. We had no power and thus, no heat as we had no alternative heat source in our apartment. Everthing outside was coated in thick sheets of ice. I wouldn't realize the magnitude of the damage until the following day as our second floor view only afforded us images of other homes and few trees. I remember that Thursday home with our baby as very quiet and long. No heat, no music, no tv, no way to cook, no adult to talk to. Our apartment's temperature dropped to 50F. I dressed Olivia in layers of clothing--tights, a couple pairs of leggings, booties, two shirts and a sweater. I probably dressed myself similarly. I was so relieved that Alex got home safely that evening and was thrilled to have him home.

Friday morning I was facing a similar day, but now we were worried about the cold. It was survivable, but uncomfortable. It felt miserable, to be honest. Then a mom I knew from kiddie gym at the YWCA called me and offered to come pick us up. This was very kind and brave of her as it meant taking her two kids with her out into the icy destruction to get us. She finally convinced me that even though they were without heat, we could at least have company being miserable. When we all got tucked into her truck for the short distance to her home, I remember thinking it looked like a war zone outstide. I had had no idea, being isolated in our apartment as we were. We saw lines and limbs everywhere, all over the roads, sides of roads, limbs falling as we drove, huge old trees split down the middle, completely crushed by the weight of the ice. Utility crews were everywhere, roofs were caved in, cars smashed by falling trees, everything looked crumpled and broken. It was a staggering sight.

Friday passed much more easily since the company was comforting and warming all its own. When Alex picked us up that evening he brought the happy news that our apartment had power and heat (most likely thanks to the fact that we lived on the power grid between two hospitals.) Many of our friends and family would be without power for fifteen days or more. At some point Maine was declared a State of Emergency and power crews worked around the clock with the aid of relief crews from other states. Clean-up would continue well into March and April. Everyone of us who lived through that ice storm has always wondered when the next one would hit and if it would be as bad. It was. 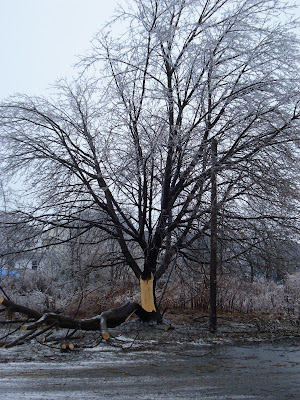 It was for New Hampshire and Massachusetts, especially. Maine's coast (and the county we live in),though spared in '98, was hardest hit this time. We lost power sometime around 3am on Friday morning and it was restored by 915am Saturday morning (which meant we were able to attend our friends' Swedish Glogg party without worry). We had our gas stove for cooking and our gas stove in the livingroom, so we had an alternative heat source this time. Alex stayed home from work on Friday and we kept busy playing Monopoly, doing some chores and reading. I was glad I had laid in a supply of candles, because we had to light them by 415pm this close to the Solstice. Many of our local friends are still without power, and they make the best of it, like any ice storm veteran would, like our friend the choir director, who managed to direct the holiday concert on Sunday anyway. 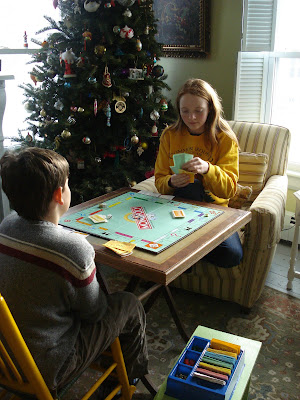 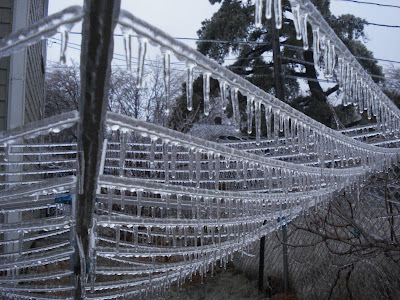 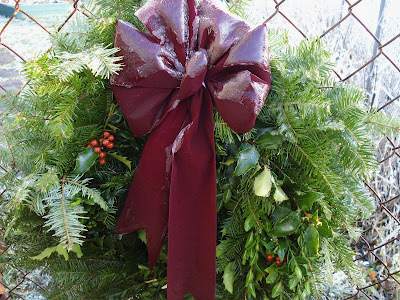 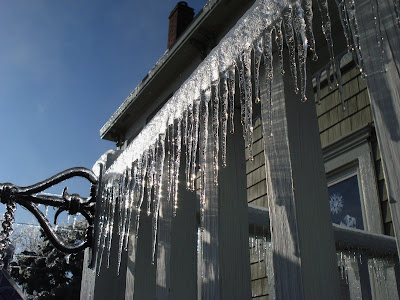 During and after the storm we went out and took many pictures of our ice-encrusted garden, marveling at the huge icicles forming on everything. Every blade of grass was encapsulated, the high-bush cranberry viburnum was flattened to the ground in a cascade of ice, and the Yule wreath bows became glass-like. (Check out Flickr for more pictures.) 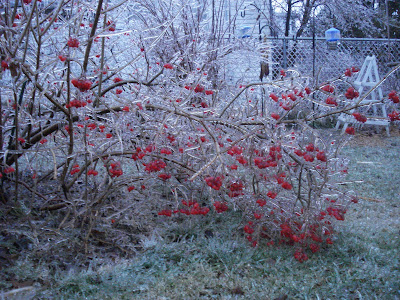 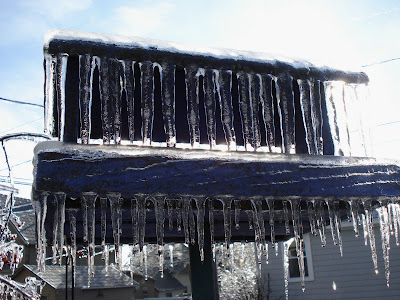 Just like the Ice Storm of 1998, this ice storm left our world looking, well, other-worldly. Like Planet Ice, where everything is crystal, fragile and can snap and shatter in an instant. It was difficult to mesh the two images of our warm, fragrant, yielding and buzzing with life-garden of summer with this icy garden. I was able to find beauty in our garden still, amazed by it's new sparkle. 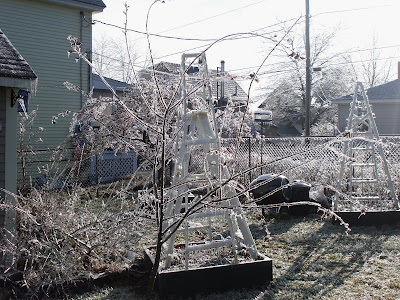 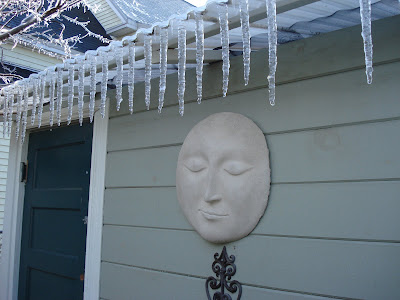 So now we have survived Ice Storm of 2008. We escaped any real damage, and were forced to slow down during this busy season for an evening of togetherness by candlelight. Now we know what to expect for other storms and how we might prepare better in this house for when storms hit next time. I only hope our friends and neighbors were as unscathed. 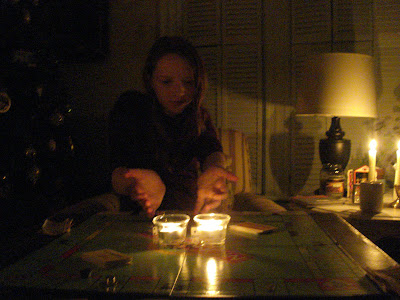 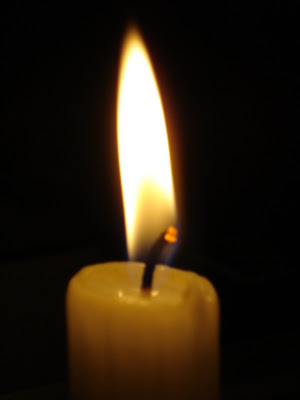 Posted by Amy Bradstreet at 9:59 AM