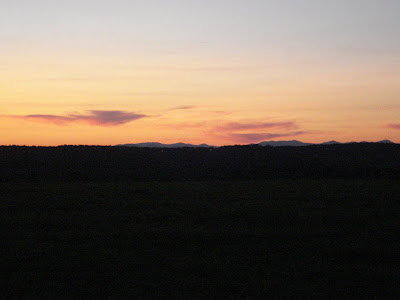 During this journey of mine in mothering (and co-parenting) I've had the intense pleasure of being aware that I am aware of change. It's not the same as knowing the change will come or being cognizant of change that has happened. It's seeing and feeling the changing happen. This awareness feels like getting slowly used to the dark; the way the dusk sets in, distorting the shape and color of things until your eyes adjust to the newness and possibilities of black. So many times I know only that it's light and then it's dark. But to watch and feel the twilight, to be aware that twilight is here has been one of the most important gifts I've ever receieved.

Twilight moments I can recall were things like those first smiles from my newborns, drunk on my milk and I was aware that my children were profoundly connected forever to me as I was to them. The first hug, the first words, the moment they cracked up over something funny, the look in their eyes when Daddy came home for the day, all moments I felt alert, trying to see things better. Later came moments when I was aware that I was both forever losing something, but gaining something at the same time. Or my children were, more importantly. Like when I could see both of them becoming toddlers and no longer babies, individuals apart from me. Those sunsets, those dusks, felt terrifying and glorious all the same because in some way I (or my husband and I) had to let go and send our children out into the dusk and it's distortions and look for them in the dawn of their new found growth.

I've been experiencing these near dark moments when I'm around my daughter. I've become aware that change is coming. Of course lots of change has already occurred. Olivia no longer has the shape and size of a little girl. She, in many profound ways, no longer has the mind of a child either. When she turned eleven last spring, that's when I began to feel my eyes, mind and heart adjust to the new sights. This feeling only increased this fall when she and I would discuss politics, for instance. There I was, discussing politics, not teaching, and not lecturing. She was engaged and perceptive and I started to feel myself become even more wide-eyed.

Now I find myself on the brink of having to let go, let her find her way in the dark while I stagger around crying with joy and loss for a bit. Olivia is a reader, a voracious reader and her tastes are not that of the average pre-teen girl. So when she picked up Twilight, I didn't question her choice. Besides, both Alex and I were sharing the book and reading right along with her (we fancy vampire tales, especially of the romantic variety--"it's called sharpening the saw", as Alex said) when we could sneak it from her, that is. And I quickly realized that this would be the first book Olivia had read that contained passion of a sexual nature, some light eroticism and overt romance. Oh. Truly a twilight moment. Here she was, in the shadows between girl and woman and it was all new to her. Here I was, feeling the darkness descend. I would not be allowed where she was going. I have been there, in my own twilight, of course (I even married my own Edward), but she was not inviting me to come along. What she felt, what she understood, how it changed her, I'm sure I'll ever know. I can only project what I once (or do) feel, but I can not know what she's feeling in this particular dusk. 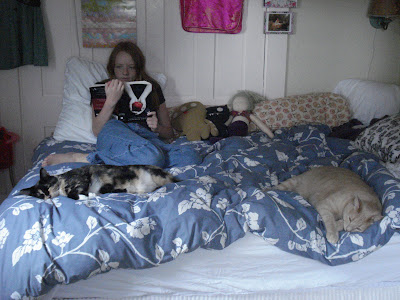 So when I sat in that dark theater next to my eleven year old daughter, watching the movie Twilight (both times) I did watch her body language, I did catch the quiet looks on her face, yes I did steal glimpses, but I did try not to intrude. This is her twilight, her moment of discovery. And I know it. I'm aware. I know she will be, is, changed, forever. She's not the little babe, the toddler, the precocious five year old, even the poised nine year old. Olivia has become something new. Though this is the sort of thing I'll reread and be moved to bone-shattering tears in the future, I feel more than anything, profoundly blessed and awed once again by my child and by the gifts in my life. Because while my daughter makes her way in the twilight, I'll prepare to meet her in newness of dawn. 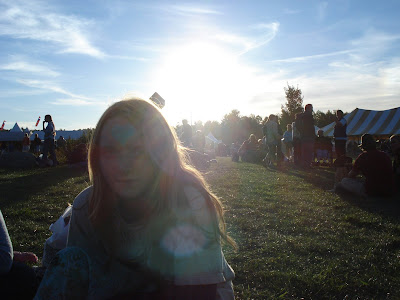