It's A Sad Day In Maine 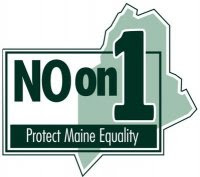 As you've probably heard, the equal marriage law was overturned by people's veto yesterday, here in Maine. Though it's tempting to feel bitter (oh how very tempting), and to think things like Maine: The Way Life Should Be--Unless You're Gay , I'm trying very hard to not succumb to that way of thinking. I know that in the end, dignity, equality, fairness, respect and love will prevail, but who wants to wait? I'm also thinking that some major act of civil disobedience is in order. Perhaps a million strong on the Washington Mall, burning their marriage certificates might knock some sense into people? Mass divorce, anyone? I don't feel great about having special rights that others do not have, that's certain. As for you, President Obama, I've never been happy with your stance of gay marriage and the fact that you still state that you are against it, and that you did nothing to help Maine with the historic fight for civil liberties, yeah, I'm angry. As for those on the oppostion side who insist their vote to repeal equal marriage had nothing to do with bigotry, hate, fear or homophobia, do me a favor and stop lying to my face.

I know we won't give up the fight for basic civil liberties, and I hope others (eh hem, Obama) finally see that until we are all free, none of us are free (thank you, Emma Lazarus.)

One day the arguments against gay marriage will seem just as ludicrous as this does.