My Mother, The Poet 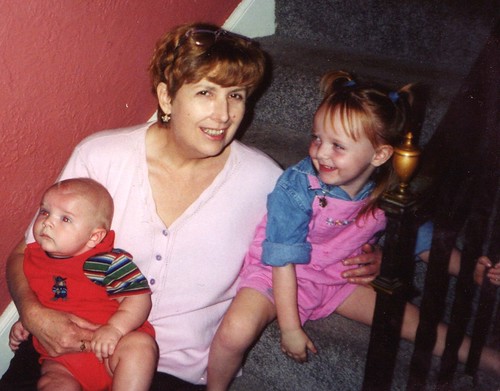 Three years ago, today, April 27, 2008, my mother went away from us forever. I miss her, of course. It helps to remember her and her stories and the gifts she did leave behind. My mother was talented and remarkable in so many ways. She could design and sew whole sets and period or whimsical costumes for a community play. She wrote plays. She designed and drew in meticulous pen and ink, the theater posters. She wrote music. And so many other things, like poetry. She wrote this beautiful poem when our daughter, Olivia was born in 1997 and we used it a year later in Olivia's UU dedication ceremony. She was so many things to me, but for today, I remember my mother, the poet.

An olive stone from heaven fell,
Lay buried in a fecund hill-
A mound, a tree, a hut, a tell,
A grove anchored by labored till.

With roots in earth we raise the pale-
A timbered wall. A village call
A home, a place from which to sail,
To trade, to deck the festive hall.

Within to dwell, a hearth of coals
To cook upon. With oils anoint
The blessed feasts, the babies's souls,
The lintel post, the compass point...

We nomads fly like ravens do
As embers rise to silvered skies,
As ash becomes transformed to dew,
As wat'ry susurration sighs

Upon the plain. The currents loft
A dampened breeze from cloud to cloud.
The winds are kind, the air is soft, The groves are
ripe, the people proud.

The dew becomes a torrent then,
While lonely Noah sails the flood.
Until a dove returns to men
An olive leaf, that promised bud...

A tree becomes a torch. A wheel
Is forged from flame and sweat
(Which is the fuel upon the steel).
The heat of flame and oil are met

Upon the hearth, and pots are cast.
Amphorae brim with wine and oil,
And fury like a comet's blast*
Explodes on Troy to burn and boil.

Etruscans flee to Rome's new shores
And hearths are laid and babies born,
And lamplight glows within the doors
As mothers spin, as sheep are shorn...

As Pisces** swims through cosmic seas
An icy comet soars the skies.
On Tuscan hills the olive trees
Are christened when Aurora cries.

Where living waters gently flow
As liquid as the flood, as birth,
The tender shoots of olives grow,
A dove's green promise brought to earth.

Beneath a Roman harbor's quays
The ancient oils anoint the wrecks,
And spread within the planet's seas
A baptism of foaming flecks...

A single babe, an olive stone,
The bud, the living fruit, the tree-
Each makes a story of its own
As life, as possibility.

*Hale Bopp comet was visible in 1997, and we could see it in the dawn sky while I labored with Olivia.

**Olivia was born March 13, which makes her a Pisces, The Fish.
Posted by Amy Bradstreet at 10:12 AM