Eighteen Years Of Love And Geekdom

It's true, we referenced Star Wars, Hitchhiker's Guide To The Galaxy, The Jerk and Stephen King in our wedding vows. Our wedding that was eighteen years ago today. I fell in love with Alex the moment I saw him in our theater class and when he came over to flirt with me one day before class began, I was in the middle of reading A Brief History of Time. His flirting included a show and tell of his nasty but healing case of poison ivy on his legs, and I was interested. He has great legs, but still. Our first dates included multiple sittings through a John Waters film, dressing up as the Undead to attain free admission to a Stephen King movie premiere, marathon D&D games, attending SCA events and cramming ourselves into a friend's dorm room to watch Star Trek: The Next Generation and Twin Peaks.

So it seems appropriate then, that we spent our anniversary weekend with the kids attending PortConMaine. This was our first time attending and we had such a great time with this positive, welcoming, diverse and fun crowd of cosplayers, gamers and geeks of all sorts, that we definitely plan to return next year. (And heads up unschoolers: if you are looking for another unschool-y, conference type of vibe, full of great energy and fun, where you can let your geek flag fly? PortConMaine is just the place for you.) The Pokemon sing-along room looked like a happy place to be. Adam made himself at home in the video gaming room. The miniatures table in the game room was amazing. There was a large room full of screens and video games, music and dancing and game tournaments, there was a large board game room where you could bring your own and start a game or borrow a game from the large selection of available games. The Apples to Apples table was huge and constantly laughing, for instance. There were several discussions and screenings of My Little Pony, Doctor Who, and Pokemon. There was a round table for parents, a cosplay repair room, vendors and a garage sale. All of us attended the Buffy episode screening of Once More With Feeling and belted out all the lyrics with all the other fans. (Right after Olivia and I sang along with Dr. Horrible fans.) One of the most fun things was spotting our favorite characters from books, films and television. There was plenty of outrageously good cosplay. Because it was our first PortConMaine, we didn't do any serious cosplay, but Adam did wear his Minecraft costume for part of Saturday and Olivia as Amy Pond was pretty spot-on. 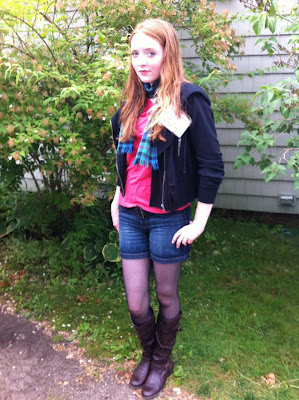 Some of our favorite cosplay was from The Avatar: The Last Airbender and The Legend of Korra. I think we were all pleased at how welcoming and positive the entire event was. It was well-organized, the attendees all were enthusiastic and happy to be there. And to Alex, who sat in the Disney Sing-Along room with me and belted out all the lyrics, even to the ones he didn't know (we missed the Ducktales years, I guess)and held my hand the entire time and didn't mind that we were probably the oldest people in the room (it doesn't matter, no one else minded either), I love you. I adore your brain, your legs and your GEEK. I love that we're still doing things like this together after eighteen years of marriage and I love that we get to share our geekness with our geek kids in our geek life. Happy Anniversary, my love!