We were minus one at our Thanksgiving table, yesterday. Alex's mother, who has been facing a cancer diagnosis since late August, was admitted to the hospital a third time on Wednesday night after nine hours at the ER. After much discussion with Alex's father and family (do we cancel? do we postpone?), and knowing that his mother had been stabilized, we moved our dinner plans to later in the day. Still. Nana was sorely missed and our hearts were (and remain) heavy with worry and concern for her.

But for the family that could gather here, we were thankful for the pleasures of good food and warmth and most of all, for the company of each other.

Cheese and Cracker Plate with Olivada Spread
Turkey, cooked to perfection (and ease) in the Roaster Oven
Simple Herb Stuffing
Scalloped Corn
Roasted Maple-Glazed Sweet Potato, Beets and Red Onion
Red Cabbage Cranberry, Pear, Apple and Walnut Salad with a Honey Vinaigrette
Mashed Maine Potatoes (peel on)
Green Beans in Brown Butter with Toasted Almonds and Parmigiano-Reggiano
Tassajara White Bread Rolls
Cranberry Orange Tea Bread
2 Pumpkin Pies
2 Pecan Pies
1 Canadian Maple Cream Pie
and thinking of Nana, before we knew she wouldn't be able to be with us, I made up a Gingerbread Cake, having overheard her saying that was her favorite when she was a girl. This recipe comes from a 1972, Cooperative Extension Service Bulletin from University of Maine at Orono (revised by Nellie Gushee) and it's the perfect Gingerbread, dark and dense and rich in flavor. Stir molasses, sugar, salt and spices together; add melted shortening (butter), then eggs and beat well. Add baking soda to boiling water and add alternately with flour to creamed mixture. Bake at 325F in a 10 x 13-inch greased pan and cook 35-40 minutes or until browned and springy to touch. I've struggled with my mother's recipe for her Cranberry Orange bread for years, never having it come out right and this year, I finally found a recipe that works really well (recipe linked above). Tip: let the bread cool at least 15 minutes in the pans before removing. Alex is our pie baker. He makes all the crusts and pies from scratch. Aren't they beautiful? Up early on Thanksgiving Day, we made calls to family about Nana and rearranged the day some, and then we spent the day doing all the last bits of arranging - flowers, tables, chairs and plates. We juggled dishes upon dishes in our small kitchen and puzzled out placement for more in our single oven. Having run out of fridge space, we put all the drinks out on the deck, along with two extra coolers for pies and cold foods. We did much of this with the Macy's Parade on in the background and we all awaited Santa's arrival, which to us, signals the start of the Yuletide season. Late afternoon, the white lights that Alex had put on some of our trees lit up our garden as the sun set, and family soon arrived. Papa arrived first, coming directly from the hospital and he had a moment to relax and crack some nuts and chat with the kids while Alex and I finished the last bit of food preparation in the kitchen. Then we had the challenge of getting everything to the table all at once and making sure everyone could get servings. Luckily, everyone was fine with family-style service. 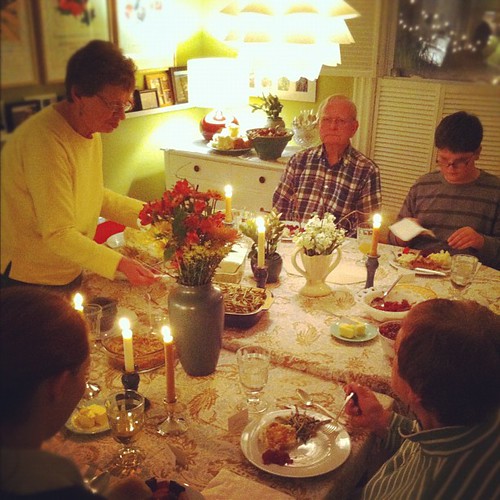 The meal was relaxed, the conversation was good and we all expressed our wish that Nana had been with us.

After dinner,  everything was removed to the kitchen and we instituted mandatory take-home boxes, and seeing that this made not a dent in the food, I encouraged any of our friends to abandon their own leftovers and come eat ours. Sadly, no one arrived to save us from ourselves. Anything after that point was pretty much just polite waiting around on the pretense of full stomachs, until someone mentioned pie. Then indecision set in and so everyone had some of each kind, I think. The Canadian Maple Cream is going on our Must Have list. Because Papa had been up so late the evening before, we all encouraged him to stay over so he could get a good (warm) rest and so that we could feed him in the morning and he wouldn't have to resort to "dirty eggs" at a diner near his home.

By 9pm, our kitchen was returned to rights and we settled in with Papa to watch Planes, Trains and Automobiles, and we laughed for a bit. 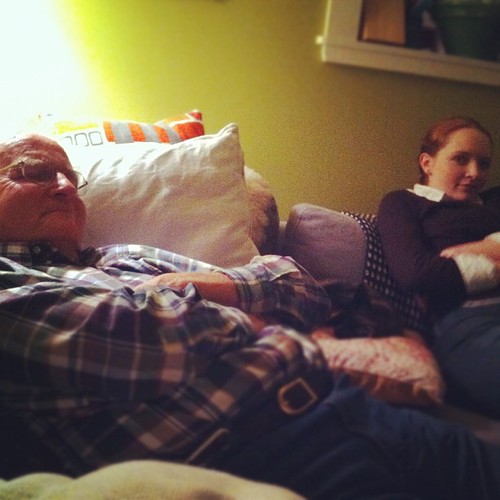 This morning brought more news and concern for Nana, and so Papa ate with us and then headed up the road to see her. We'll do the same soon. We don't know what winter has in store, just yet. All I do know, is that it was good to gather together, as many as were able, in love and support before the storms begin.
Posted by Amy Bradstreet at 1:10 PM