Comfort and Joy Come To You : Yule : Eleventh Day

Simply put, our Yule, our Santa Day was most joyful. We woke to snow, not much, but enough to give us a winter white landscape outside our windows. After two hours of sleep, Alex and I were up and readying the the house for company. Alex started his Yule bread and put the ham in the oven. Before everyone came downstairs, I tidied some and took in the quiet beauty of the morning. Heather, Alex's sister arrived first and we sat in the cozy living room, next to the roaring Netflix fire, while the kids read their note from Santa. The two aunts would arrive around noon. We opened stockings, and Santa gifts and then exchanged gifts with each other. I say this every year, but our two teens are such joys to give to and it's such a wonderful pleasure to be able to do so. Since Papa is always asking if we have a comb for him to use, he was given a mess of combs he can stash in our home to his heart's desire. 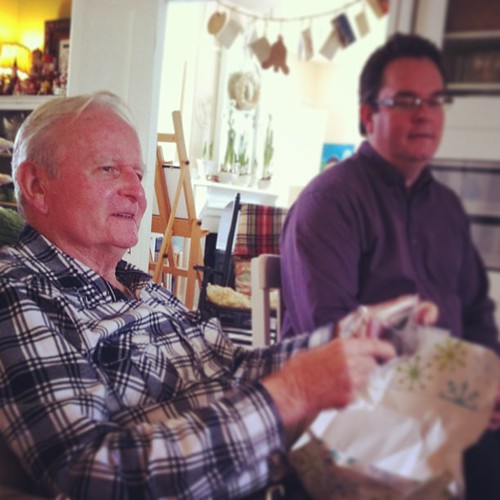 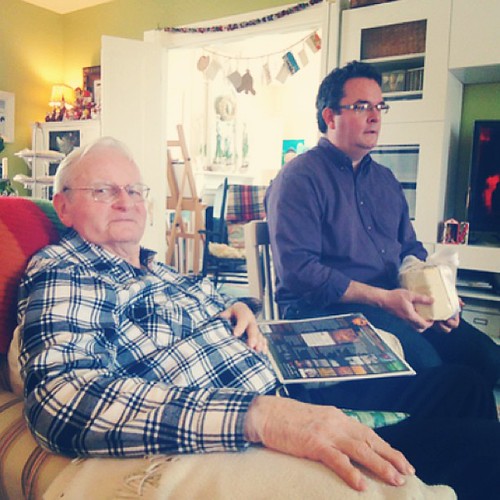 Olivia received so many beautiful luxurious soaps and candles. Adam received several Minecraft-themed things, like a Creeper wallet and mug, in addition to some Brony or My Little Pony accessories. Both were given books; some longed-for, some surprises. And music, of course. Alex gave me things that made me know just how much he understands me. (Like my gorgeous mermaid Swatch watch.) In a hilarious turn of events, I gave him a watch, too. Maybe even a really good crappy watch. If you are familiar with the film Planes, Trains and Automobiles, you will get this. Adam and Olivia gave each other things, too, and the thought and attention to their choices for one another speaks volumes regarding their friendship. Midway through our family gift exchange, the aunts arrived and we made room for them around the uh, fire and tree. When the kids were down to their last gift, they both seemed pleased as anything with their morning. And then this happened. To say that these two geeks were thrilled would be an extreme understatement. For the first five minutes, they only spoke some sort of shared sibling geek language, which sounded like gibberish to us, but probably wasn't. At any rate, we all shared in their immense joy, which was just the cherry on top of their day.

The rest of the day was about gathering around the table for food, eating cookies and candy, lighting candles and enjoying the company of each other. Later, when we tried yet another seasonal film out on Papa, (this time it was A Christmas Story, which I thought for sure he'd get into...I was wrong), we tried and tried to convince him, as Adam said, "to suspend disbelief", but alas... I wonder what he must think of our taste in movies? I'll have to ask him. As ever, it's no matter. Our day was well-spent, surrounded by love and joy, and memories and comfort. I hope it was much the same for you and yours.
Posted by Amy Bradstreet at 11:43 PM