We attended MOFGA's Farm & Homestead Day in Unity on Saturday, June 15. We lucked out with a gorgeous, not too hot, day, for it, too. While we found we didn't learn much more than we do from say, the fair, it was still a day well-spent. The grounds are so beautiful, any time of year, and we always marvel at how different it all looks, smaller, somehow, without the fair. 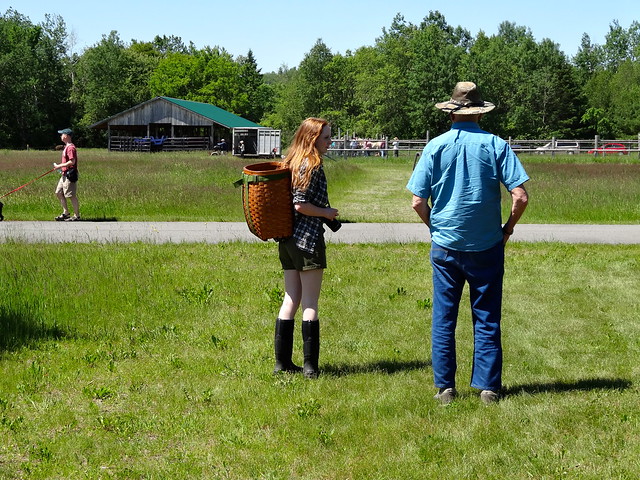 It took us a minute to decide which workshops we wanted to catch, so we checked the schedule a few times, and decided to split up. Alex went to a stump fence building workshop, I took off to hear about dairy goats, and the kids went with Papa to learn about Nalbending. When the kids were done with Nalbinding, they came and found me with the goats. Olivia and Alex spoke to the angora goat farmers for quite awhile, as Olivia is interested in fiber goats. I know she came home with a book. Regrettably, we left other goodies behind, including the two angora goats that were for sale. Near the end of the event, we went to a talk on community building that was really fascinating and unexpected, as it was about the things most dear to our hearts - opting out of those systems that are limiting and instead focusing on creating community that is sustainable in every way. It was a positive ending to our day in Unity, and I'm still processing that particular talk. Good stuff. We still had plenty of day left, so before we returned to the homestead, we picked up food for the grill. We changed into swimsuits, grabbed the camp key and went down to the pond. The water was on the cool side, with all the 40F nights we had had in early June, and the wind was up, which meant we had to have a roaring fire, of course. We swam until hunger drove us out of the water. For dessert, we roasted marshmallows. For about an hour, we sat together and gazed at the flames and threw the odd pine cone into the pit to see it burn, while we listened to the water lap against the boulders. On our walk back to the house, our homestead, we spotted wild columbine on the path. That was the perfect ending to our day. Posted by Amy Bradstreet at 2:22 PM