This morning we woke to sunshine streaming through our windows, the good smells of breakfast being cooked by Alex, wafting up the stairs, and Papa sitting at the table with his book. John, Alex's dad, arrived last night. We fed him a late supper of quiche and Solstice Cake and he took himself to bed. I saw his light on at 11pm, but he says he "nevah read at-Tall, just fell asleep". So this morning, he had his orange juice and coffee and told us about his book. I said to him that I hoped he wouldn't mind our Yuletide activities, the baking and cooking, music always playing and he said with a shrug of his shoulders, "And why should I mind?" 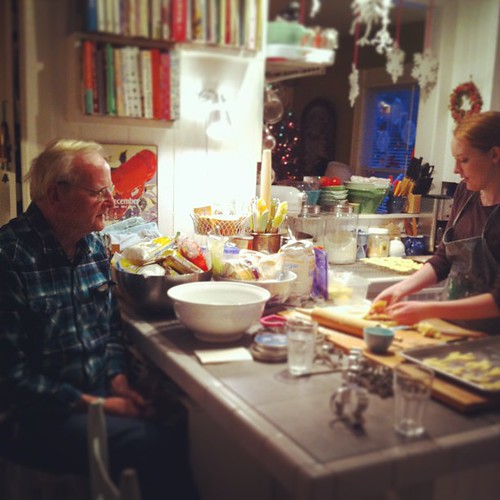 All day, Papa seemed rather content to just be; to sit in the rocker, or nap under the afghan my grandmother crocheted or eat whatever we put in front of him. Later, when the kids took over the kitchen from Alex, Papa joined them and sat and chatted with the kids about their process. Later, over dinner, he told us more stories about the family tree, the homestead during his childhood, and relatives we know only from old black and white photos. His only complaints were that he didn't much like the Hobbit soundtrack and the movie we put on before dinner was "queer and weird" (it was Scrooged).

He's good, easy, comfortable company and we're glad to have him.
Posted by Amy Bradstreet at 11:46 PM