Adam, 13, has been having a lot of fun designing Minecraft templates at PaperMinecraft, this week. 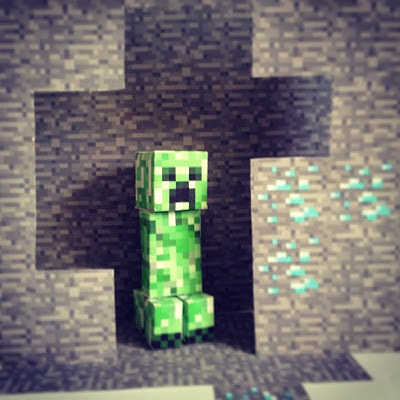 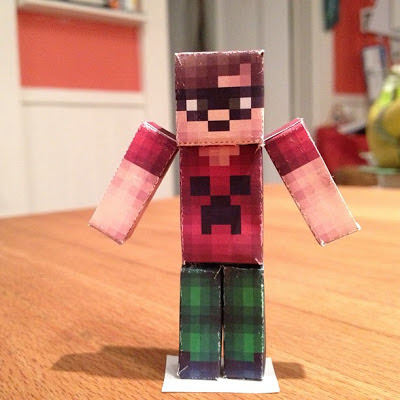 The really fabulous thing about this is, Adam has been using all the skins he has designed at Planet Minecraft. For example, this is the skin he has designed for himself. Adorable, eh, cool, right? It's clear that he really enjoys constructing these toys and he becomes completely engrossed in the project, so much so that he referenced this article about the effect working with our hands on our brains has, several times.

If Minecraft is not your thing, there are plenty of paper toy templates out there, many of them free. In my search, I found this Pinterest board called Printables & Paper Toys, which looks like a great resource.

--Also, Adam is experiencing a growth-spurt and has grown 4-inches since the middle of September. One of those inches he's grown in the last month. Today he is 5-feet 10 1/4-inches. Coincidentally, our house and all the furniture in it, has shrunk. (Olivia, who will be 16 next month (!!!), is just a bit bitter about being short at 5 feet 8-inches.)

Olivia, on the other hand, has been exploring and expounding upon The Misogyny Within The Criticisms Of The Misogyny Regarding Disney Princesses and My Little Pony with a side of The Inherent Racism Within Both the Critiques and Stories. For example, she correctly points out that much of the feminist and social justice critiques of Disney Princesses, begins and stops with the actions of the princess, but never lands on the other characters or even the writers or creators of the films. Belle is blamed for her Stockholm Syndrome, but The Beast is never blamed for being a kidnapper. In Disney's The Princess and the Frog, "black people spend most of the movie trying to become real humans". Even within My Little Pony, widely loved by the social justice community, she has been troubled by the problematic othering regarding the treatment of the character named Zecora, discussed here. She has also pointed out the indentured servitude and infantilization of the dragon Spike, among many other problematic themes within the show. I've been encouraging her to write her thoughts down, but for now, she's happy to process these thoughts with us as her sounding board.

--By the way, Olivia needed to download Minecraft to her new Mac laptop, (and there's a rumor that this is a difficult task), she found a simple tutorial that had her running the game in minutes with no issues. If they aren't doing any these things, they might be singing all the Les Mis songs. To kazoo.